Mood issues such as depression and anxiety

Symptoms can vary but include:

Secondary symptoms may include:

What is going wrong?

We must look at multiple area’s to identify imbalances and dysfunction – these include: 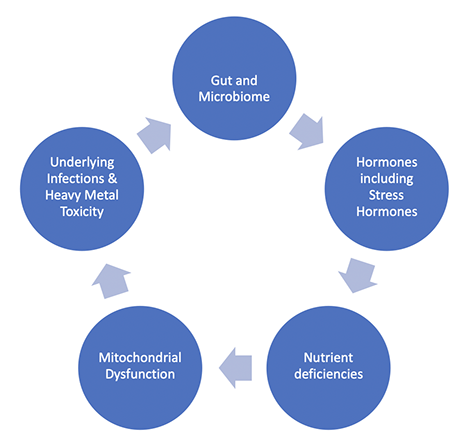 Amongst its numerous roles, the bacteria in our gut helps to digest our food and produce specific microbes that can have systemic influences both in our immune system and our nervous system.

Research has found an increase prevalence of Small Intestine Bacterial Overgrowth and Irritable Bowel Syndrome in Fibromyalgia: you can read more about SIBO & IBS here.

The composition of the gut microbiome in Fibromyalgia has been found to show significant alterations and recent research has revealed a correlation between the microbiome and disease involving chronic pain, whilst the pain intensity experienced in FM has reportedly been associated with the extent or severity of SIBO.

SIBO is frequently associated with an increase of Intestinal Permeability which can result in the introduction of immune cells to antigens in the digestive tract which can affect immune modulation.

If there is an imbalance of gut bacteria, overgrowth of pathogenic bacteria and yeasts can occur.  These overgrowths (that can include candida albicans) when given the appropriate conditions, can evoke a systemic inflammatory response which can result in disruptions to hormones and cognition.

Dysfunction of the Hypothalamus-Pituitary-Adrenal Axis (HPA Axis) is closely associated with FM.

Chronic stress results in the prolonged fight or flight response, which is considered the alarm reaction and leads to the rapid activation of the autonomic nervous system and the secretion of adrenaline and nor-adrenaline from the adrenals. The HPA axis is then activated and is mediated by the stress hormone Cortisol.  Extended activity can result in lasting dysfunction as fatigue develops.

The HPA axis also communicates with the immune and neuroendocrine stress systems.

The diagram below details the systemic changes this instigates:

The adrenal glands are just one part of the endocrine system, that is responsible for hormone production and release. Chronic release of cortisol can affect other hormones that are vital in helping our bodies heal.  Fibromyalgia often is associated with disrupted levels of Oestrogen, Progesterone, Testosterone, Serotonin & Melatonin, Thyroid and Human Growth Hormones.

Our body uses hormones as messengers and they influence, amongst many other functions, our growth and repair capabilities.

With FM, low hormone levels can often contribute to poor sleep and poor healing capability which can result in raised pain sensations that can then amplify the HPA activity further and lead to a viscous cycle of increased stress and reduced healing.

Deficiencies in key nutrients can become a stress to the body, in addition to contributing to dysfunction in key systems and processes.

Lack of certain nutrients including Vitamin D, Glutathione, Magnesium and Selenium may all contribute to the development of the condition. The following nutrients have all shown to be important in FM. 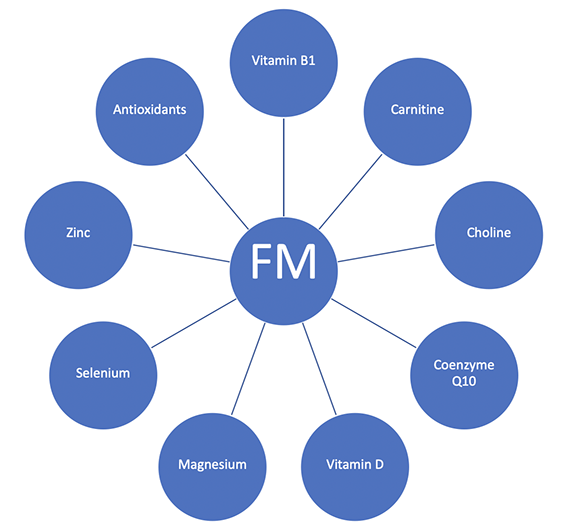 Mitochondria act as the power plants of our cells.  They produce ATP which is our bodies currency of energy but are reliant on various nutrients to support their function. Mitochondrial dysfunction is associated with FM, fatigue and pain but is also influenced by nutrient deficiency, increased ROS and oxidative stress, environmental toxins/heavy metals and underlying chronic infections.

Some chronic viral infections can reside in the mitochondria, affecting their ability to produce energy and resulting in dysfunction,

Many types of chronic infection can contribute to FM.

Heavy metals including mercury, aluminium and lead can all contribute or exacerbate FM and they are found widely in our environment. Heavy metals can affect nerve tissue and influence metabolic functions such as energy production and they can displace certain minerals which are crucial for the production of neurotransmitters.

Fibromyalgia is a complex, multi-faceted condition that is different with each person.  Yet there are some common similarities that are found in most cases.  These include:

Dietary support for FM can be found here

Characterised by chronic pain & fatigue, fibromyalgia is a rapidly growing disease – by numbers of diagnosed cases (affecting 2-3% of the global population) and is traditionally found more commonly in women, mostly occurring between the ages of 30 and 60, although it can affect people of all ages.

In many ways, Fibromyalgia and Chronic Fatigue Syndrome draw parallels with each other, with a large proportion of sufferers being diagnosed with both conditions.  Both conditions are without a definitive test to offer a firm diagnosis, which often results after all other possible conditions have been excluded.

Many factors are now accepted to contribute to the development and severity of fibromyalgia including:

Functionally and naturopathically, our approach to Fibromyalgia centres around the interactions of organs and systems throughout the whole body.  This helps us uncover the multiple factors that can contribute to symptoms and identify root causes of the condition. 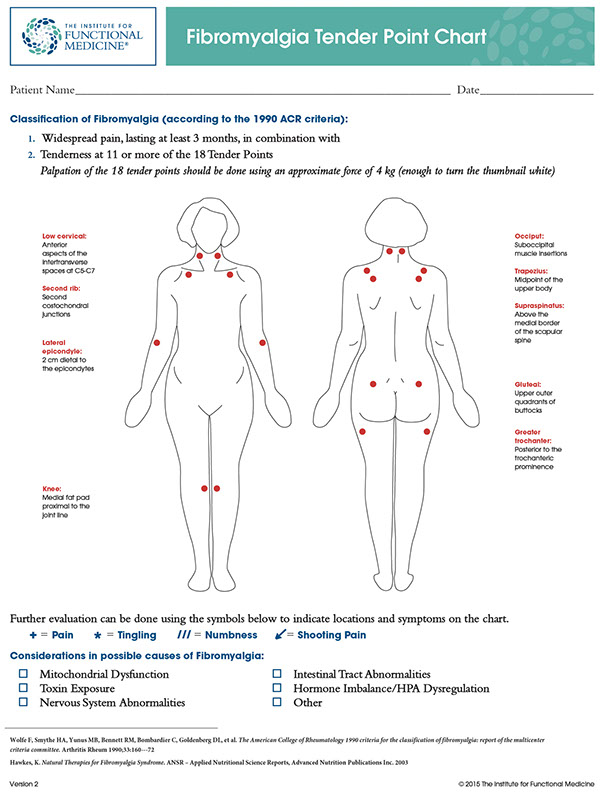 Please complete this form to get in touch or alternatively contact me here: