The role of the immune system in promoting good health cannot be underestimated.

Autoimmune disease, which affects approximately 5% of the population, is characterised by the immune system reacting against our own body tissues.

So many of the people I see in my clinic report health issues that can be traced back to an issue with the immune system that may be overlooked by more traditional healthcare approaches.

Autoimmunity is a vast and complex topic and can be very worrying for people trying to get answers. Here, I hope to provide some straightforward information and guidance that may help you determine if your immune system might be playing havoc with your health, and what can be done about it.

But first, let’s rewind a step and look at how things go awry in the first place.

A fundamental function of the immune system is the capability to distinguish ‘self’ from ‘non-self’, and to respond accordingly when foreign matter is observed. This can be dietary, bacterial, viral or parasitic infection. Part of this response includes making antibodies that directly target and destroy what the immune system regards as an invader.

Mood issues such as depression and anxiety 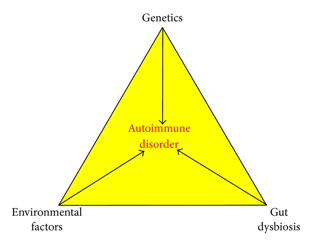 The factors are as follows:

Genes. Although not the most crucial factor which determines whether or not you will develop a specific health condition, genes, of course, do play their part. Indeed, current studies suggest that genetic predisposition accounts for approximately 30% of all cases. The other 70% is due to environmental factors including toxic chemicals, diet, gut dysbiosis & infections. You can click here for the full NCBI research paper.

It is also important to know that having a genetic predisposition doesn’t necessarily mean that you will develop the disease. Much can be done to prevent it from developing in the first place, also by paying attention to the other two elements of the triad.

Intestinal permeability (better known as leaky gut) and gut dysbiosis. Increased Intestinal permeability is an early biological change that often precedes the onset of autoimmune diseases. In addition to bacteria and certain dietary components, one of the primary instigators of leaky gut is gluten. Other dietary factors such as allergenic foods, certain medications, infections, stress and toxic molecules may also increase permeability.

These factors can cause the intestinal wall to open up becoming a gateway, meaning that bacteria, toxins and food particles get through and can enter the bloodstream. The immune system sees these as foreign objects and goes on the attack which can result in inflammation.

Environmental factors. The environment we live in plays a huge role in our health: it can disrupt the immune system and contribute to chronic inflammation.

‘Environment’ encompasses a wide range of contributing factors; however, the common ones are stress, air quality, nutrition, toxins (including heavy metals, mould exposure), viral and bacterial infections and hormones. For some, seemingly small stressors can have a big impact. By looking at and adjusting environmental stressors on health, we can look to identify – and ultimately reduce – the triggers that contributed to autoimmune disease. . 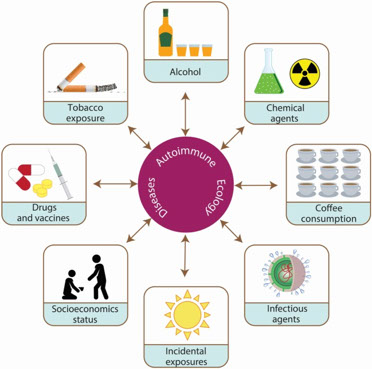 I like to refer to this as ‘the dance of the immune system’, because it so perfectly captures the ways these three elements interact with our immune system and affect one another.

“Detection of predictive biomarkers in the early stages of autoimmune disorders can be used to identify, halt, and even reverse autoimmune disease. We sound the warning bell, but we also offer the hope of a solution”

In recent years, it has emerged that numerous autoantibodies may be detectable in the preclinical phase of autoimmune disease many years before the disease becomes apparent. They also provide a high diagnostic positive predictive value.  This means that if you test positive for certain antibodies, medical science can predict your risk of developing the corresponding autoimmune disease and its severity with great accuracy.

Depending on the specific antibody, they can be recognised many years prior to clinical diagnosis of a condition.

For example, in rheumatoid arthritis, the rheumatoid factor antibody has a predictive value of 52-88% (depending on the study), whilst anti-CCP antibody predictivity reaches 97%. If both are present, predictivity rises to 100%, with both antibodies having been detectable in blood test up to 14 years before manifestations of the symptoms of the disease.

Conventional medicine is designed to manage disease symptoms rather than finding the root cause.  Medications including NSAID's, steroids and then DMARD's are often increasingly needed to modulate or supress the immune system.

The functional medicine approach is based solely on finding the underlying imbalances which include looking at all the dietary and lifestyle factors mentioned in the autoimmune triad above. 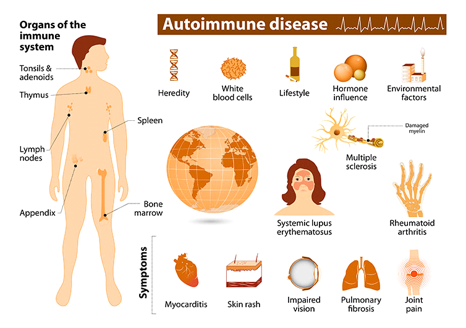 My message to anyone who is suffering is always, ‘let’s have a conversation…’

The good news is that there is so much that can be done to support immune system function. Testing is a vital part of getting to the bottom of what is really going on, and once we have a clear picture, then simple (but not always easy!) dietary and lifestyle changes can be implemented.

If you have any questions, then you can get in touch via the contact form on this website or give me a call to book an initial consultation.

There is a lot of useful information out there. Should you wish to do some further reading, then I can recommend the following websites and resources:

*It’s important to mention that with some autoimmune diseases – such as Rheumatoid Arthritis – when there is considerable deterioration of joints, we can look to slow down further destruction, but we cannot reverse the damage.